New York. Mayoral elections. Eric Adams. These are the words that are heard the most on the streets of New York these days. And this is because on November 2nd, the city will choose a new Mayor. The vast majority of polls give Eric Adams the chair in the City Hall. But who is he as a leader? Well, he is a retired police officer and author, natural of Brownsville. Mr. Adams was elected Brooklyn Borough President in 2013 by putting together a diverse coalition of Brooklynites to become the borough’s first Black leader.

During his tenure, the Borough President Office (BBPO) partnered with Transdiaspora Network in mobilizing Brooklyn’s Latino and Caribbean communities around health equity, and supported our efforts to promote cultural diversity and inclusion in the field of youth development.

The Brooklyn Borough President Office (BBPO), at the request of Transdiaspora Network, granted a citation to the renown Cuban filmmaker Pavel Giroud for the good use of the art film art as a social tool to educate the general public about HIV/AIDS and reflect on its complex social issues from a humane approach.

Officially invited by the BBPO, on December 2nd, 2015, our President & Founder Ariel Rojas participated in the panel discussion “HIV and Mental Health of LGBTQ People of Color” to commemorate the 2015 World AIDS Day at Brooklyn Borough Hall. 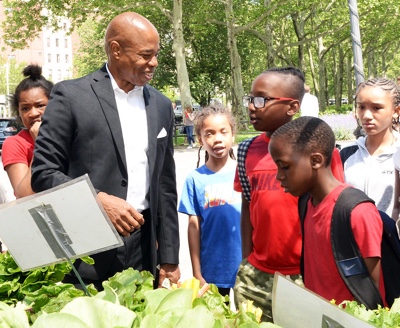 Mr. Adams is emerging as the winner of Tuesday’s mayoral election in New York City, a position that is often considered the most difficult one after the US Presidency. If he wins, Mr. Adams will have to manage the exit from the pandemic with the opening of schools and the returning to normality in the city. Last June’s Democratic primaries, he was a strong leader, defender of the middle and popular classes, and was at the forefront of the fight against racial discrimination. Mr. Adams, with a centrist Democratic profile, is also close to the business circles of the “Big Apple,” the financial lung of the planet.

His work has already led to successful proactive public health efforts across the city and increased education in schools and with high-risk populations in lower-income areas, partnering with civic organizations and health experts.

If elected, he will be the second African-American mayor of New York City.